On August 2, The Alliance for Consumer Education (ACE) attended the Eastern Aerosol Association (EAA) golf outing at Crystal Springs Resort in Hamburg, New Jersey. The longtime relationship between ACE and the EAA boasts many successful fundraisers and partnerships since ACE’s inception in 2001.

ACE helped run the Hole-In-One contest, this year sponsored by Chemours, which gave the chance for players to win $10,000 upon landing the coveted hole-in-one. Sara Stickler, Executive Director, ACE, and Haley Diamond, manager, program development and communications, met with golfers and kept an eye out for potential winners. The EAA also holds an annual ACE fundraiser at the event, in which $100 is donated on behalf of every golfer who makes an Eagle. The program, Eagles for ACE, was initiated in 2016.

“We are proud to support ACE and its efforts to eliminate inhalant abuse,” Dennis Smith, President of EAA, said. “Our Eagles for ACE program allows the industry to give-back during our annual gathering and make an impact on an issue important to us.” 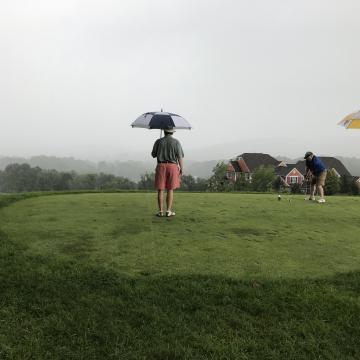 On August 14, ACE was at the Midwest Aerosol Association (MAA) Golf Tournament at the Seven Bridges Golf Club in Woodridge, Illinois. ACE helped run the putting contest, this year sponsored by DS Containers, where golfers opted in for a 50/50 pot. Keller Sehringer with Cobra Plastics won the contest taking half of the pot with $455 going to ACE. “The putting contest is a fun and engaging way for our members to support ACE’s mission and hear about new developments first hand,” said Brad Brunsman, President of MAA.

Together, both MAA and EAA raised more than $1,000. All of the proceeds from the tournaments will go towards updating the ACE Inhalant Abuse Prevention Kit. Originally created in 2002, the kits have reached countless kids in all 50 states and have been adopted by multiple state curricula.

“We are not only grateful for the fundraising support,” Stickler remarked, “but for the continued leadership and industry insights from both organizations. We look forward to presenting the updated Inhalant Abuse Prevention Kits this fall, thanks in part to EAA and MAA.”