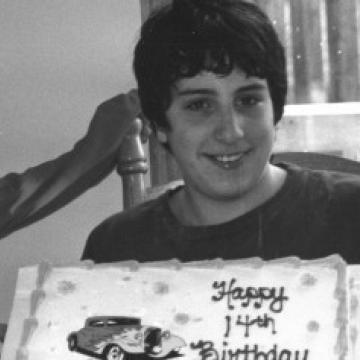 I don’t think I could have ever imagined how much losing a child would change the rest of our lives, but not a day passes that I don’t continue to see the major effects losing Kyle has, and continues to have, on all of us.

We talked to our kids about drugs and alcohol since they were little. We knew they didn’t mess around with them, but we also knew we had to keep on them. They were getting older and peer pressure is tough to beat. I wish I could figure out why neither one of us thought about or knew anything about Inhalant Abuse. We should have. It wasn’t something our kids would abuse, so it didn’t affect us. A school friend of Kyle’s showed him that if you take a can of computer duster and inhale, it would make you dizzy and feel good for a couple of minutes. He told him it wasn’t a drug and it can’t hurt you. He was right that it’s not a drug. It’s a poison and it does damage your body every time you use it.

Kyle experimented with inhaling from cans of computer duster over the next few weeks, unaware that during this time, he displayed many of the signs of inhalant abuse.

Sign 1: I was building a computer at this time and bought a three pack of Dust Off to clean out my other computers. A few days later when I went to use them, they were gone. When I asked Kyle if he had seen them, he said he and a friend had run around spraying each other and used them all. (Kyle’s 1st sign: going through a spray can product too fast).

Sign 2: A couple of days later, Kyle came home after school and told me his tongue hurt. I looked at it, but it looked fine to me so I told him to see his mother. (Kyle’s 2nd sign: Kyle’s tongue hurt because it was frostbitten).

Sign 3: A few days later after dinner, Kyle came out of his bedroom and said that he threw up. I kept him home from school the next day, but he seemed fine. I was confused how you could throw up so much and just be fine afterwards. (Kyle’s 3rd sign: Upset stomach or throwing up for no known reason).

Sign 4: The next day, I bought a jumbo can of computer duster, since they were out of three packs. Instead of knowing the signs and being able to deal with this, I was bringing more computer duster into our house. A few days later, I went into Kyle’s room to remind him he needed to clean his bathroom because we were having some company tomorrow. He became angry and started yelling for no apparent reason. Kyle never did this. (Sign 4: Change in behavior).

Sign 5: I went upstairs and got ready for work one day, leaving about an hour later. Being a police officer, I always made sure to kiss my family goodbye, but I was still so mad at Kyle that I didn’t kiss him or say goodbye. I guess I thought that would teach him. At 5:30 AM the next morning, I was advised to respond to the station. I was told that an ambulance and police were at my house for a child not breathing. I was rushed home by another officer. I found out that Kathy had gone to wake Kyle up for school. When she went into his room, he was sitting up in bed covered by a sheet. She called for him to wake up and went to make her coffee. When Kyle didn’t come upstairs, she went back to his room, grabbed his arm, and shook him to wake him up. Kyle fell over on the bed. He had a red straw coming from his mouth and a can of Jumbo Dust Off between his legs. Kyle was dead. (Sign 5: Death. I got this one).

I have no doubt that if we had known the signs of inhalant abuse, we would have seen that Kyle was exhibiting them and would have been able to deal with this. I fully believe that if Kyle knew the truth about inhalants, he wouldn’t have used them and would still be alive. Since Kyle’s death, I have found out that all of my beliefs about inhalant were wrong. Inhalants are poisons, not drugs, and were never meant for use by people. Most inhalants are common household products and teenagers are the most at-risk group for abuse.

He was such a great kid. He had so much love in him and he was so smart. He would always give me a hug and kiss goodbye when he was leaving, except when he was getting out of the car at school. I don’t think I could have ever imagined how much losing a child would change the rest of our lives, but not a day passes that I don’t continue to see the major effects losing Kyle has had on our lives, and continues to have on all of our community.