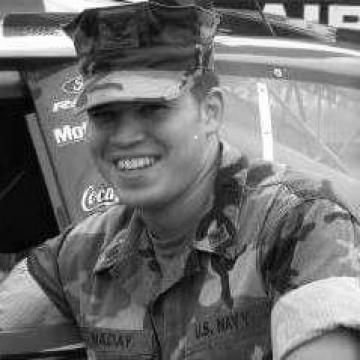 My son Jamie was a hero. A Naval Cryptologist, with the highest security clearance, he went through two tours of combat duty in Afghanistan and Iraq. He came back to the United States with a chest full of medals, but also a head full of memories and demons he could never deal with. For almost nine years he drank. While he drank his wife left him - taking their baby son. He alienated everyone with his angry and sometimes violent outbursts. He was homeless for almost a year. One night I brought him soup in zero-degree weather in New York because he wouldn’t get into the car and I didn’t want him to freeze to death. A few months ago, he told me he was ready to change. His liver was fatty and he had esophageal problems from the drinking.

Yes, he went 40 days with NO drinking. We were so proud of him and happy. What I did NOT know, was that he had replaced the drinking with huffing - computer duster. When he was found dead in his apartment (I called the police for a safety check – I couldn’t get in touch with him and I was frantic – I live in New York and he had moved to Florida) …he was already dead for two days with a computer duster can in his hand.

He died of heart failure, which is common. Was the five-minute thrill worth his life? Taking my heart as his mother’s with him? Depriving his son of him forever?

He never thought huffing would kill him. Jamie was afraid of death, that’s why he stopped drinking. He was afraid his body was already showing the effects of alcohol, so he switched to huffing and now he is DEAD.