Strike Out Inhalant Abuse and Superhero Night with the Bowie Baysox 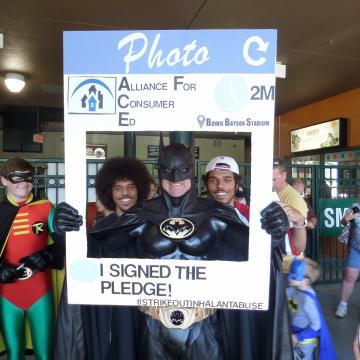 On Saturday, July 26th the Alliance for Consumer Education (ACE) traveled to Bowie, Maryland to team up with the Bowie Baysox and Batman to Strike Out Inhalant Abuse! Fans and Baysox staff dressed as their favorite crime-fighting heroes to celebrate Superhero night at the stadium.

The pregame events started with Batman and Robin arriving at the stadium in the Batmobile. The pair, along with the car, were featured at ACE's table near the front gates of the stadium. Young superheroes had the chance to meet Batman, sign the Strike Out Inhalant Abuse pledge, and spin the wheel to answer inhalant abuse questions to win ACE baseballs or bags.  All fans entering the stadium received a Strike Out Inhalant Abuse poster that featured Baysox player, Michael Ohlman, #34.

A few lucky fans were chosen to go out on the field with ACE and Batman for the opening pitch where they answered questions regarding inhalant abuse prevention. Then, Batman read the inhalant abuse pledge for the entire stadium. Join Batman by signing the pledge here.

The ACE booth moved to inside the stadium during the game, where youth and adults had another chance to spin the wheel, sign the pledge, and pick up more information about inhalant abuse education and prevention.

During the 2nd inning, Sara Stickler, Director of Development & Operations at ACE was interviewed by Bowie Baysox Broadcaster Adam Pohl on the Baysox TuneIn radio station.  Stickler spoke about inhalant abuse prevention at home and in schools and where to find important information regarding this issue.  A clip of the interview can be found here.

ACE thanks the Bowie Baysox for their partnership in helping to spread the Strike Out Inhalant Abuse message!

For more pictures from the event, visit ACE's Facebook here.