Celebrating the Life of a Loved One 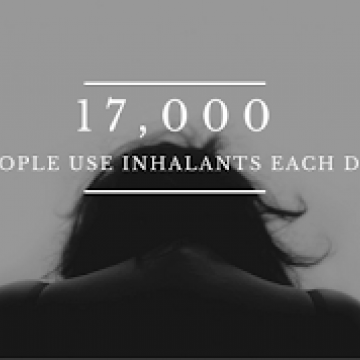 Inhalants are easily accessible, legal, everyday products. When intentionally misused, they can be deadly. Inhalant abuse is a lesser-recognized form of substance abuse, but it is no less dangerous. Anyone who abuses inhalants can die the first time trying it. Faith Coleman learned the hard way that inhalants can kill. In an interview with ACE, she told us her story.

It all started when she received a phone call that her daughter had died. Prior to the call Coleman had suspected there might be something going on with her daughter, Lisa. After being apart for a period of time, Coleman came to visit her daughter. Lisa showed warning signs that Coleman now recognizes point to inhalant abuse. She wanted some of her brother's medication and was acting hostile. Coleman attributed this animosity to bipolar disorder and found it hard to get involved until it was too late.

Coleman didn't know about huffing until it killed her daughter. Huffing refers to the deliberate sniffing of common products found in homes and communities with the purpose of “getting high.” According to the American Association of Pediatrics, nearly 20% of all eighth graders have experimented with some form of inhalant - that's one child in every five. Inhaled chemicals are rapidly absorbed through the lungs into the bloodstream and quickly distributed to the brain and other organs. Within minutes, the user experiences intoxication, with symptoms similar to those produced by drinking alcohol. With inhalants, however, intoxication lasts only a few minutes, so some users prolong the “high” by continuing to inhale repeatedly. Short and long term effects of huffing include: headaches, slurred speech, nausea, severe mood swings, loss of consciousness, depression, and death.

Coleman started to learn more about the condition that led to Lisa's death. Friends of her daughter told Coleman that Lisa was afraid her kids would be taken away because of her drug problem and that Lisa had been blacklisted from receiving any narcotics from her doctor.

When they found Lisa's body, there was no sign of drugs anywhere. She was clean with nothing in her system. She had a can in her lap and another was found in the room, fully used. Looking back, Coleman said that if she had known how bad her daughter's problem was, she would have intervened. If only she had known about her friends enabling her. If only she had known that her daughter and her 4-year-old child barely had anything to eat in the fridge.

Inhalants are popular among teens and younger people because they are easily accessible and cheap. No I.D. is needed when purchasing a product that can be abused. People think that it won't kill them. They don't know that it deprives users of oxygen, suffocating them. Even if a user is accompanied by someone, that person will be of little help when the inhalant overrides the system.

Often times people forget about the ugliness of the aftermath. Coleman saw pictures of the crime scene. She saw her daughter's face buried in her legs. She saw her bloodshot eyes. This is the horrifying scene many families have to see when one of their loved ones has overdosed on inhalants.

Lisa's death 2 years ago affected a lot of people that were in her life. Her mother was angry with her death and her careless decisions. Lisa's friends felt guilty that they didn't let her mother know what was going on so she could try to prevent the tragedy from happening.

When asked about any advice Coleman had to share with parents she said, "Parents need to be upfront with their kids and not beat around the bush... You can't be naive! They're not just being moody, there could be something going on. If you think it's none of your business, it's your business. Ask questions." She urges parents to be more involved than she was.

In the wake of this tragedy, some good has come. Coleman organized a butterfly release as an event to help heal and console those who have shared her experience in losing a loved one to inhalant or drug abuse. She came up with the idea after a group of Lisa's friends organized a series of silent auctions where the proceeds went to ACE's Inhalant Abuse Prevention Program. Lisa got a butterfly tattoo after her aunt had died so Coleman used that idea to form the first butterfly release that took place in November 2015 for the one year anniversary of Lisa's death.

In just a under 2 months on November 5, 2016, the 2nd annual Lisa Doughty Memorial Butterfly Release will be held from 1 pm to 4 pm at Freestone District Park, 1045 E. Juniper Avenue, Gilbert, AZ 85234. There are currently 200 butterflies left. A minimum donation of $20 will secure a butterfly for release in your loved one's name. Any donation amount will be accepted. Please send an email to memorialbutterflyrelease@yahoo.com with the following information if you are interested in making a contribution:

Name:
Address:
Email:
Will you attend the release: yes/no:
Name of loved on honored:

Butterflies are secured for those unable to attend will be released as a group on site. Those able to attend will receive a butterfly to release individually on site. For any additional questions please send an email to memorialbutterflyrelease@yahoo.com.

Faith Coleman is appreciative of everyone who contributes to this cause. She urges people to learn from her experience and help spread awareness about the dangers of inhalants, the deadly drug that no one talks about.