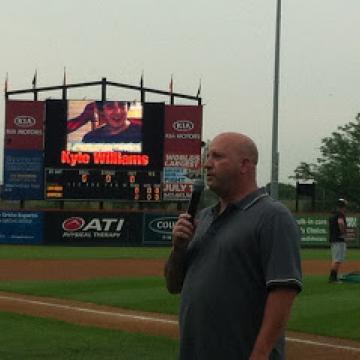 The Alliance for Consumer Education (ACE) and the Midwest Aerosol Association (MAA) teamed up with the Schaumburg Boomers in Chicago, Illinois on Friday, June 21st.  ACE and MAA were present at the Boomers Baseball Super Hero Night to bring awareness and education on inhalant abuse prevention.

A pre-game presentation by Sgt. Jeff Williams.  As an ACE Board Member, Jeff spent a few minutes before the game talking to the fans about the loss of his son, Kyle, to inhalants.  Jeff was able to connect with parents and ask them to talk to their children.

The first pitch from Batman.  In honor of his son, Kyle, Jeff chose a fan from the audience to throw out the first pitch.  This lucky winner was dressed as a superhero, but also got to meet a community hero, as Jeff gave him the ball for the first pitch.

Sgt. Jeff Williams was interviewed during the game by WRMN 1410 AM.  Jeff helped to spread awareness on inhalant prevention by giving parents the dangers and signs of inhalant abuse.

MAA and ACE booth for a meet and greet with Sgt. Williams.  Fans were invited to stop by the booth to receive more information and materials on inhalant abuse prevention where they also were able to meet Jeff.

It was a great night at the ballpark as ACE and MAA partnered to spread inhalant abuse prevention and ok to spray messaging to fans.   Check out more pictures from the night on ACE's Facebook page.

ACE would also like to extend a huge thank you to MAA for inviting them to be part of the game and also for their donation to ACE.  By working together ACE and MAA are able to reach more consumers and help in educating them about the proper and safe way to use aerosols.  Thank you MAA for your support!